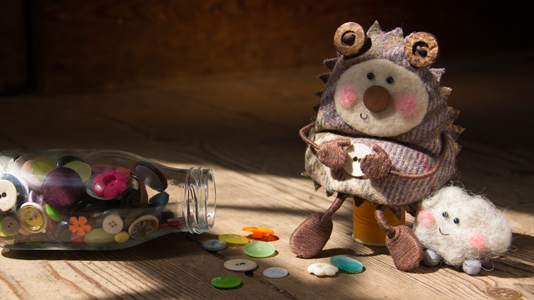 This summer we went long haul to the Seoul Promotion Plan conference in South Korea to pitch our series-in-development, Tweedy & Fluff. This is a pre-school stop-motion animation, created by children’s author Corrinne Averiss, with Cbeebies as its primary broadcast sponsor. The project was invited as a list minute finalist into the international pitching rounds and was unique both in that it was the only project from the UK and also the only stop-motion offering on the schedule. Chris Randall represented this co-production between Second Home Studios and Stitchy Feet, which is ostensibly about a child and their first pet.

The 10 minute pitch involved a storybook-style start followed by a lighthearted tour of the characters’ world. There was also a reasoning for why, in such a busy world, a show which instils nurturing qualities is important for young viewers. There also featured some bespoke animation featuring the two main characters especially produced for the Korean hosts, which made a funny and fitting end to the presentation. The awards were announced on Thursday 6th June and Tweedy & Fluff was announced as the Grand Prize Winner. As well as a trophy, the show also received $15,000 USD which will go a long way towards further developing the project as it moves closer towards closing the necessary finance and a green light for production.

This website uses cookies to improve your experience while you navigate through the website. Out of these cookies, the cookies that are categorized as necessary are stored on your browser as they are essential for the working of basic functionalities of the website. We also use third-party cookies that help us analyze and understand how you use this website. These cookies will be stored in your browser only with your consent. You also have the option to opt-out of these cookies. But opting out of some of these cookies may have an effect on your browsing experience.
Necessary Always Enabled
Necessary cookies are absolutely essential for the website to function properly. These cookies ensure basic functionalities and security features of the website, anonymously.
Functional
Functional cookies help to perform certain functionalities like sharing the content of the website on social media platforms, collect feedbacks, and other third-party features.
Performance
Performance cookies are used to understand and analyze the key performance indexes of the website which helps in delivering a better user experience for the visitors.
Advertisement
Advertisement cookies are used to provide visitors with relevant ads and marketing campaigns. These cookies track visitors across websites and collect information to provide customized ads.
Others
Other uncategorized cookies are those that are being analyzed and have not been classified into a category as yet.
Analytics
Analytical cookies are used to understand how visitors interact with the website. These cookies help provide information on metrics the number of visitors, bounce rate, traffic source, etc.
Save & Accept
Powered by