Motion Control and Why We Love it

Over the past 18 months, we’ve been developing our own Motion Control Rig. As self-confessed geeks of anything with motors, gears, and computery bits which control them (just take a look at our logo) we welcome any opportunity to impart motion into a shot to make it more dynamic, balletic, emphatic… (insert suitably OTT adjective here). You get the picture. We’ve already used the Manta rig with great success on three projects for Sony; the Moviemix channel ident is a cheery, seasonal campaign involving 10 x identical camera passes capturing different stop-motion elements which were composited together. ‘Till Death Do Us Part captured a 6 day time-lapse of wilting roses with a single, creeping camera movement running safely during the whole time. True Crime – ‘Women That Kill’ moved the camera on a ‘forensic journey through the evidence’, stitching 4 linear camera passes (IE, no fairings) end-to-end.

Motion Control (‘MoCo’) has been around for a good many years since the Star Wars days, pioneered by the genii that were John Dykstra and  Richard Edlund. After growing up in the thrall of dog fighting X-Wings and TIE-Fighters, I later had the privilege of training as a Clapper Loader/Motion Control Assistant learning from the superlative VFX Director of Photography, Peter Tyler, working on Red Dwarf series 5 and 6. What better way to spend your Uni summer break than blowing up Starbug?

Since making the move into animation, the advantages for using MoCo in stop-motion were obvious – where you can incrementally move the camera as you animate, thus creating the illusion of a move in real time when you play it back. While it’s always tempting to move the camera just for the sake of it, we always try to use it judiciously. For example…

Using The ‘Camera as Character’

The direction, duration and speed of a shot matter a great deal. These will set up the correct audience point-of-view whether it’s obvious why the camera is moving (Eg, moved by implied impact of something moving in shot) or subtlely exploring a world to let the action wash over you The Animal Book opening sequence was comprised of shots which moved the camera in a clockwise direction, to complement the clockwork, mechanical nature of the production design. The stop-motion paper world of Pilsner Urquell Legends (below) took the camera full circle from the town square to lush field, referencing the point of origin with the cathedral in the background.

My Motorbike (below) was a sleight-of-hand deal which moved the set, not the camera with composited backgrounds to give a drone-style whizz round the mountain, and Bechtel’s The Engineering Machine used MoCo as a time-cheat device for layering up live-action with stop-motion.

With all this in mind, we worked with engineer Rich Sykes to bring the Manta into being. From a bunch of ‘fag-packet’ sketches and long but affable phone conversations, the 7-axis rig was slowly brought into being through Rich’s patience and ingenuity. Our spec required that the rig perform live previews for stop-motion, a function missing from similarly sized rigs on the market, requiring specialist motors and drivers. Its axis capability covers linear tracking motion, rotation (or swing), boom elevation, pan, tilt and roll (for extra dynamism), plus the necessary focus control. The camera head will take any model of DSLR and will comfortably accommodate a Red Dragon or similar. The most weight-bearing axes: track, swing and boom were upcycled from some older, but incredibly robust, mechanics which in a previous life had borne the weight of a Mitchell film camera mounted on a vertical rostrum. This hefty track bed sits on a raised chassis which gives it an ideal reach over raised set decking. The rig is big enough to give a dramatic reach over a stop-motion set, and also to cope with larger life-size 1:1 sets, such as with the Sony Moviemix channel idents. It’s portable and yet rock-steady when locked into position. We’re proud to say that the Manta is one of a kind. 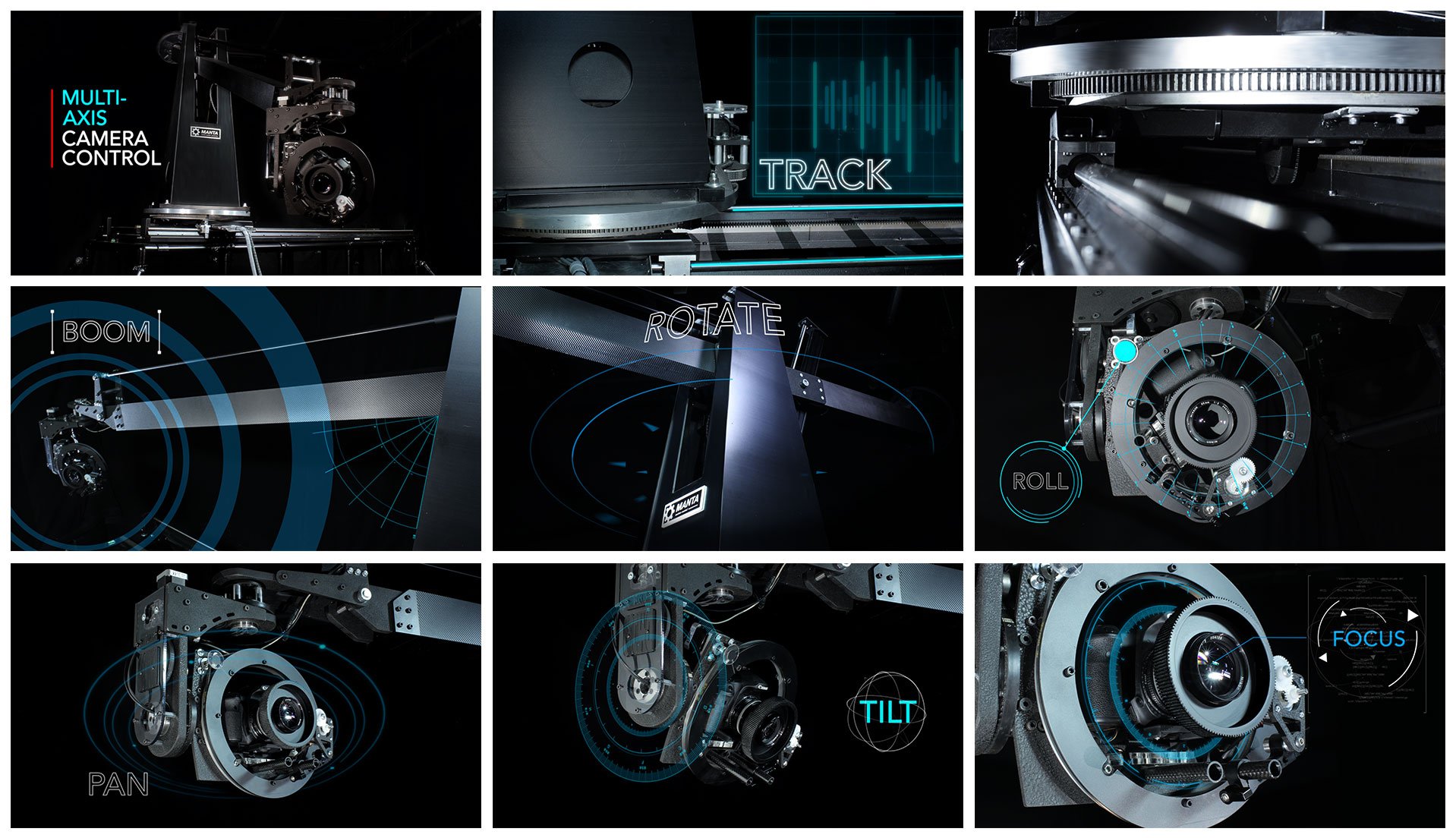 If you have an idea for a shoot which you think could be enhanced using the Manta rig, then we’d love to hear from you. We’re always looking for new ways to use the kit and the technique to best effect. Please get in touch through our ‘Contact’ page for a full spec and rate card.

We use cookies on our website to give you the most relevant experience by remembering your preferences and repeat visits. By clicking “Accept”, you consent to the use of ALL the cookies. However you may visit Cookie Settings to provide a controlled consent.
Cookie settingsACCEPT
Manage consent

This website uses cookies to improve your experience while you navigate through the website. Out of these cookies, the cookies that are categorized as necessary are stored on your browser as they are essential for the working of basic functionalities of the website. We also use third-party cookies that help us analyze and understand how you use this website. These cookies will be stored in your browser only with your consent. You also have the option to opt-out of these cookies. But opting out of some of these cookies may have an effect on your browsing experience.
Necessary Always Enabled
Necessary cookies are absolutely essential for the website to function properly. These cookies ensure basic functionalities and security features of the website, anonymously.
Functional
Functional cookies help to perform certain functionalities like sharing the content of the website on social media platforms, collect feedbacks, and other third-party features.
Performance
Performance cookies are used to understand and analyze the key performance indexes of the website which helps in delivering a better user experience for the visitors.
Advertisement
Advertisement cookies are used to provide visitors with relevant ads and marketing campaigns. These cookies track visitors across websites and collect information to provide customized ads.
Others
Other uncategorized cookies are those that are being analyzed and have not been classified into a category as yet.
Analytics
Analytical cookies are used to understand how visitors interact with the website. These cookies help provide information on metrics the number of visitors, bounce rate, traffic source, etc.
Save & Accept
Powered by